Stuart Reid has appeared at schools across the United Kingdom over the past two years promoting his Gorgeous George children’s book series with one aim: to get young people engaged and excited about reading. The self-proclaimed ‘busiest children’s author’ around today, Stuart has read to over 250,000 children in around 1000 events across the UK and Dubai, UAE and in September this year he will be celebrating his 1,000 event in London. Stuart has already sold around 50,000 copies and has enjoyed further international recognition after signing with Istanbul-based publisher, Nemesis, who have already published his first two books into Turkish.

As well as his jam-packed reading tour, Stuart has also enjoyed successful live events at the Edinburgh Festival where he plans to take up residence again in 2017, London Book Fair in 2012 and 2013 and ITV’s 2012 ‘Get Britain Reading’ campaign. He has also featured in a number of national and regional press including The Sunday Express and Daily Record, although he continues to describe himself as ‘one of the most popular children’s authors nobody has heard of’.

With five books already published and a sixth due out in Spring 2017, Stuart’s overwhelming passion and enthusiasm shows no sign of stopping. His Gorgeous George series is written specifically with children in mind and was inspired by Reid’s understanding that the books adults (like himself) loved as children – including Enid Blyton’s Famous Five and Mallory Towers – simply weren’t on the same wavelength as children today. Reid is up front with the fact that many adults and teachers will in fact find his stories hard to enjoy given the prevalence of bogies, breaking wind and false teeth flying but then again that’s exactly the point – his books provide something cheeky and out of the ordinary in order to engage the imagination of young readers. 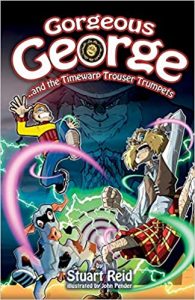